Mars One, the Dutch nonprofit that hopes to send humans to Mars by 2025, claims to have screened over 202,000 applicants for a one-way trip to Mars. They have settled on 100 finalists for this honor. Will it happen? Who knows? It depends more on money than technology. Humans have proven that they can safely pilot from Earth to Mars and land rockets intact on the red planet. Several mobile, unmanned probes have survived landings and functioned for many months on the Martian surface. The two Viking landers, Phoenix, Sojourner and Pathfinder, Curiosity and Opportunity have all exceeded our expectations. Only one of seven landings has been unsuccessful.

I’ve written two novels about going to Mars, and I’ve tried to make them as realistic as I can. The first draft of one of these novels, A Tale of Two Planets, was completed in the 1980’s but wasn’t published until 2013. The novel had to be extensively revised to reflect the amazing changes in technology in the intervening thirty years. I’ve been gratified that much of what was just a prediction in that early version has since come to fruition.

In writing these novels, I’ve thought a lot about how Martian exploration and settlement might come about. I have no doubt that Mars will have human habitation some day. But why and how? Those are the questions. I’ll give you my answers, and the reasons why I think as I do.

NASA has now committed to sending a manned expedition to Mars and has begun planning for this. Prior planning, much of it done decades ago, focused upon the physics and mechanics of going there, including plotting of projected pathways, calculation of energy requirements, design of spacecraft and landers, and estimating the costs. NASA is expert at such planning. They used all these techniques when going to the moon and in sending unmanned spacecraft to other planets.

Current planning, however, must go far beyond what has been done before, because the human aspects of the flight will need to be considered in great detail. Going to the moon and back is a relatively short-term proposition, and keeping a crew happy and alive for a few weeks is relatively easy. Any expedition to Mars worth planning, however, would obligate a crew to a three-year voyage.  Concerns of hygiene, psychological welfare, providing tolerable food and drink, meeting oxygen requirements, maintenance of bone and muscle strength, and protecting the crew from undue radiation exposure will be greatly magnified by the length of the voyage. Privations that can easily be tolerated for a week or two might become intolerable after a few months in a prison hurtling through space.

NASA and others have begun to address the human aspects of going to Mars. On the Big Island of Hawaii, their scientists are starting to explore the mundane details of providing the basics of life-food, oxygen, sanitation-for a round trip that may take three years or longer.  Their work is extending the work that began with Biosphere 2 in Arizona. I think this is essential. We must understand the limitations of closed biological systems before we can begin to plan a trip of this duration. The more we can duplicate the comforts of Earth, the better. Because of this, I believe that planning for recycling of waste and the growing of fresh food within the spacecraft will be an essential part of the solution.

Selection of an appropriate crew will surely be one of the biggest considerations. Confinement of even very compatible people within a limited space for three years can be a problem.  What happens if they can’t stand each other after a month or two? There will be no escape for them. What if they can’t agree on fundamental tactics? What about command structure? How would it be enforced? What about sex? Do you expect the crew to be abstinent for three years, and if not, how do you handle the inevitable jealousies amongst a sexually active crew?

You would want your crew focused on the mission, not on the Earth they left behind. But normal people will inevitably have ties back on earth. Do you want a crew composed of antisocial individuals, or will you search for  people to go who have strong ties to home, but who might be more skilled at working as a team? Should married candidates, particularly those with children, be excluded? The recent movie, Intrastellar, explores this issue, one that I also explored in Tale of Two Planets.

These questions must be answered before we can begin to design a manned mission. Ultimately, though, the people who become the first explorers of Mars will be volunteers and therefore self-selected. They will be adventurers, risk-takers, people willing to leave friends and/or families. I expect they will tend to be young, single, intelligent, and well-motivated. Both males and females will be included, and over the three years, they can be expected to form relationships.  Most of them will also expect to come home afterward. They won’t have an interest in staying on Mars.

How about those who come afterward?  Eventually, someone will choose to go there permanently. Why? I don’t know, but history tells us that someone will. If so, they will face major challenges.

We’ve learned quite a bit about Mars itself. We know that the main requirements for life–carbon, oxygen, nitrogen, and water–are sparse but present there, though energy will be required to bring these resources into a usable form. Much of the oxygen, for example, is in the form of carbon dioxide, which would have to be broken down into elemental oxygen and carbon via a photosynthetic process or an artificial equivalent, before the oxygen could support human life. The atmospheric pressure on Mars is only .6% of that on Earth, so compressors would need to compress the ambient air 16.88 times in order to bring it to Earth’s pressure. While necessary, that would not be sufficient, however. Nitrogen comprises only 1.9% of the atmosphere, as opposed to 78% on Earth. Carbon dioxide accounts for 96% of the Martian atmosphere. This will have to be scrubbed in order to create breathable air.

My point is that all of these manipulations require energy, and for life to be practical on Mars, some lasting source of energy must be found. None of the main sources of energy on Earth-petrochemical, hydroelectric, geothermic, wind-are known to be present on Mars. Even solar power will be less than on Earth because of the greater distance from the sun. A nuclear reactor brought from Earth might provide energy for years, but without a supply of fuel rods, it would eventually cease to function. In my view, lack of a sufficient energy source is likely to be the main problem limiting human survival on the red planet.

Why would anyone want to stay on Mars? After all, there’s nothing much there. No sports, no malls, no symphonies, no luxuries, no trees or vegetation of any type. Nothing to attract a human being. And yet, thousands of people apparently would leave for Mars in a moment if they could, as proven by the over 200,000 candidates who volunteered for the Mars One expedition.

Granted, many of these would drop out when apprised of the difficulty of the enterprise and the risks they would need to face. Still, 100 have passed their initial screening.

Why would they want to go? I’m sure that the answers are as diverse as the individuals. But my guess is that in most cases, there is some combination of the following:

If the adventurers of Mars One hope to set up a lasting settlement on Mars, they will have to demonstrate a remarkable unity in purpose and thought. If they work at cross-purposes, they will not survive. Mars One may be the first to settle there, but I somehow doubt that they will flourish there.

Religious groups are particularly prone to undertake missions of this sort, because they have faith that if they act in accordance with their beliefs, things will end up all right, and because peer pressure keeps the wanderers in line. They will tend to have the unity of purpose alluded to above. The two most important motivations for self-sacrifice are faith and a desire to protect friends and family. So my feeling is that the most likely candidates for permanent settling on Mars will be religious cults of some sort. These are of the same stock as the Puritans who came to America, the missionaries who came to Hawaii, the Mormons who fled to Salt Lake City, all the people who faced tremendous danger trying to convert the heathens on earth. And so in my second Mars novel, Red Exodus, the settlers became the Chosen, not as a literary device, but because that’s the way I think it will happen. Inevitably then, in heaven as it is on Earth  (to paraphrase the Lord’s Prayer) these brave souls will face on Mars the same issues that divide us on Earth-religion versus science, differences in religious interpretation, tyranny versus democracy, the division of wealth, jealousy, envy, personal animosity.

Will we go to Mars? You bet. And soon. And when we do, we will bring our humanity, for better or worse, along with us. 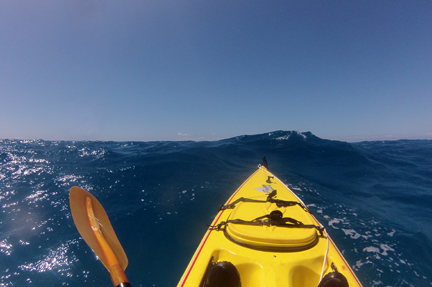